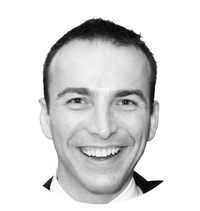 Sylvester Kaczmarek is an award-winning entrepreneur and product leader with over a decade of international, quality-driven IT industry experience.

His expertise in business strategy, operations, and product strategy has brought leadership and financial growth to companies such as Viacom, GREE, Disney, Nickelodeon, BBC, and many more. He has worked with brands such as Marvel, The Godfather, Pacific Rim, Rolling Stone Mag, Prada, and celebrities.

Kaczmarek bootstrapped two successful software companies. Sold one, and took the other one (ComAngle Entertainment) from startup to globally operating award-winning (MOBBYS 2014 and IAMAI Awards 2015) game studio. Improving the world through the use of modern technology has become his primary focus, and he is interested in using artificial intelligence (AI) to solve the world’s biggest problems through a combination of humans and machines working together in integrated intelligence.